Happy September ~ Kicking off a New Month with Seasonal Preparations 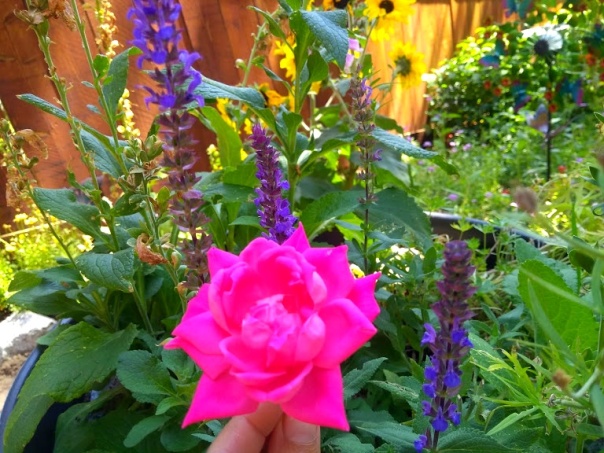 Happy September! I hope this new month is starting off well for you or feels like perhaps you got some things behind you so that you can get on to creating the new you’ve been intending.

The last day of August seemed to be a big day for many, including people and rabbits I know who all had surgeries and diagnostic procedures on the same day. Here it’s been a finalization of projects the last two days, with just a couple left for this week and I’m free!

But instead of the last day of the month, Astrid had her regular four-month vet exam on the first of the month – this day was also shared by a sweet friend’s birthday (Astrid’s birthday is upcoming though too). I’m grateful to report all is well in Queensville. She did get her usual ear flush due to excessive wax build up that her body chemistry just seems to create more than usual, and a nice mani/pedi nail clip. Her refresh mirrors my upcoming hair refresh that just so happened to get rescheduled for the Equinox, as it was the only day available. Talk about alignment. 😉 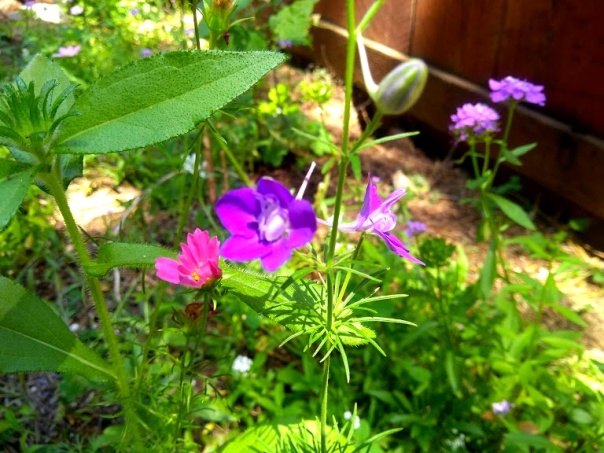 And speaking of the approaching Autumn Equinox when I’ll begin planting all of my bulbs, I’m loving the transition of late Summer to early Autumn vibes that continues. 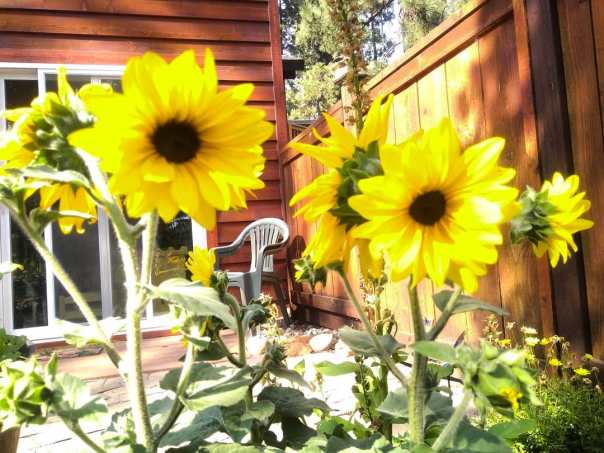 So much so, that my office got a little upgrade of late Summer/early Autumn bursts to match the enchanted faery garden just outside the door. 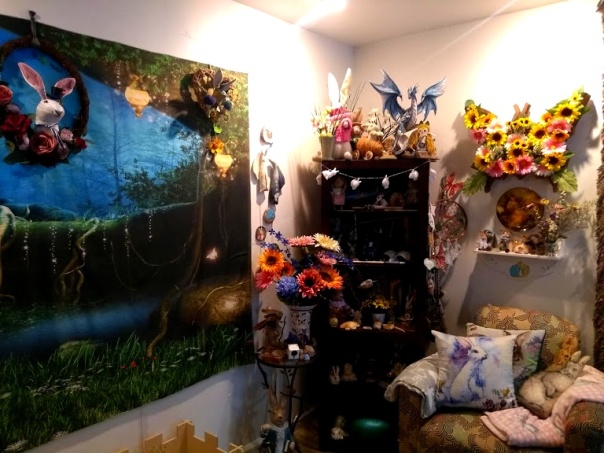 Since we moved in, which was just about three years ago, I’ve had succulents growing from my wood wall hangings. I’ve been tending them by taking them down to water when needed and replacing plants that would eventually transition. Although not a huge amount of work, it was still a task that created extra cleanup and took time when it rolled around. I decided that the easier to reach plants in the house and my garden were sufficient for this easy-breezy faery, so I transplanted all the remaining succulents to pots in the living and dining room.

I hadn’t completed the second part of the project until just yesterday, which involved replacing them with vibrant faux flowers to bring bursts of color and abundance in. 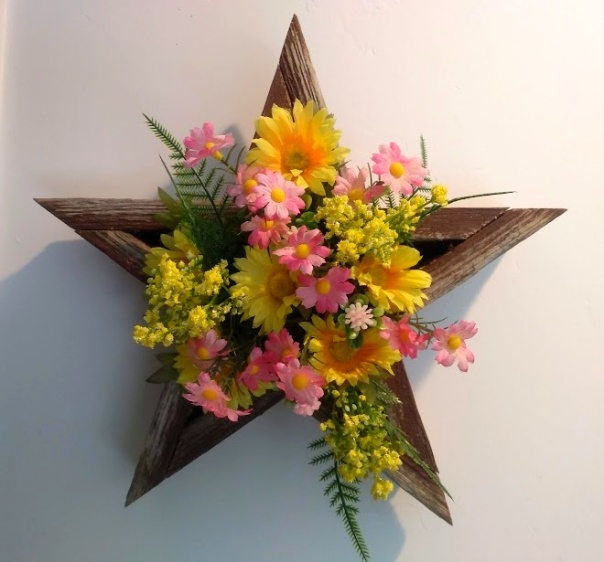 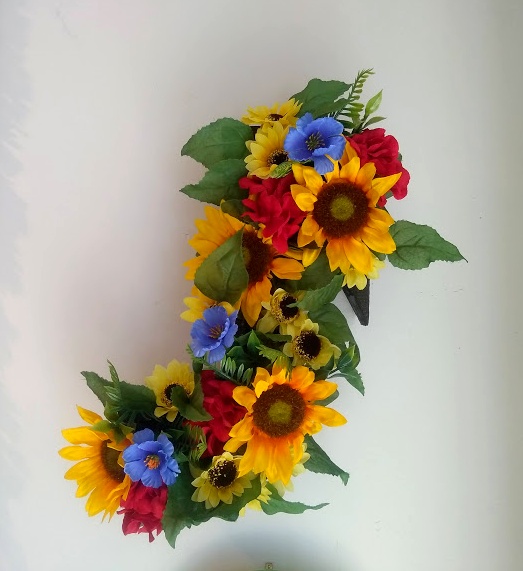 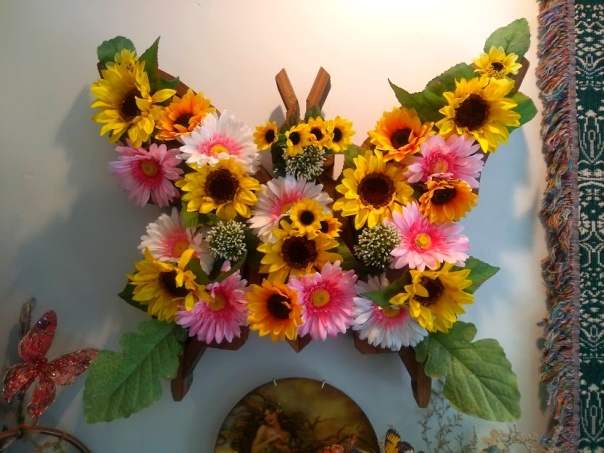 I did them in colors to match the new flower arrangements I also made for the office side tables, which replaced things that I gave away or transplanted as well. They also compliment the new rabbit wreaths that hang at top of the enchanted forest Moon portal wall tapestry that creates the magickal land for one of Astrid’s rabbit castles. 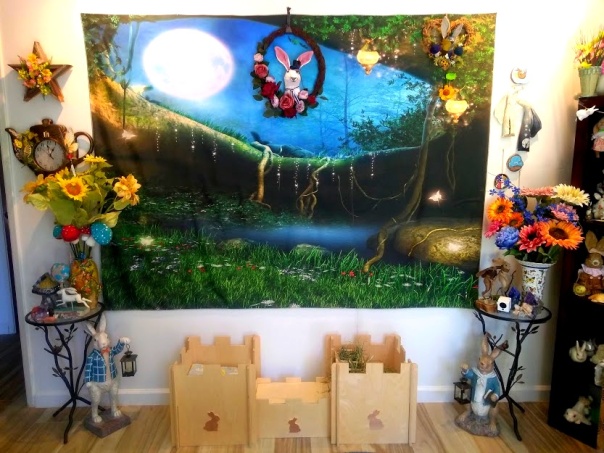 Although I do still have live plants, topiaries, pine and sugar pine cones, beautiful lichen blanketed bark, and dried forest wild flower arrangements and sacred smudge wand in my office, these add a bright, fun touch and has reduced my plant care time to nearly nothing.

Plus, they make me so happy!

This also makes them easier to change out when I get inspired to, as I do have an idea to make little wooden shelves inside each of the shapes (there’s a star, butterfly, and musical note wood frame) where I can hold crystals and other little sacred and sweet objects. But until then, the flowers are so cheerful and warm my heart. 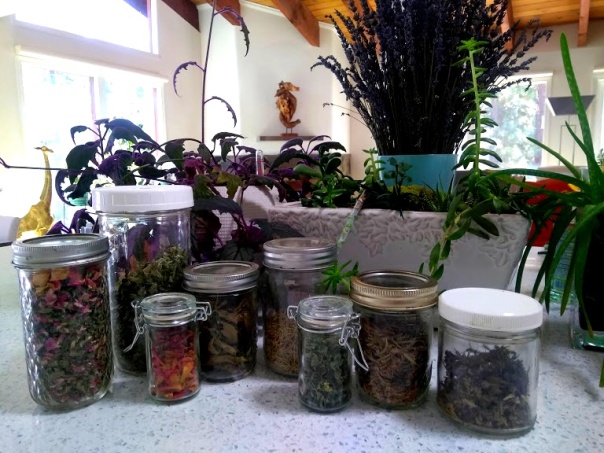 I’ve also continued to fill up my mason jars with dried aromatic herbs for Autumn and Winter baking and cooking. I still have tons of lavender that will likely fill a couple of large jars, have a last round of rose petals in process of drying, sunflower petals on the way (and some gifted heirloom sunflower seeds to plant next Spring), and will of course have a batch of things from the tower when the last harvest takes place. 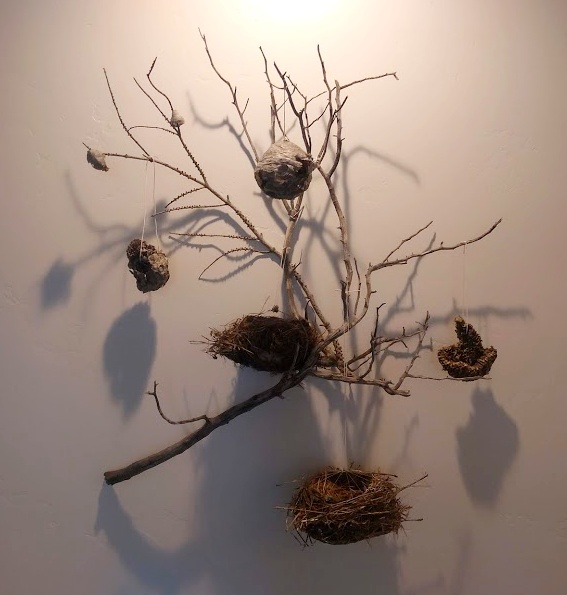 And I added another wasp nest to my nest mobile (now housing seven nests – wasp, bee, and bird), which as you can see has grown both in manzanita branches and nests since first I started creating it. 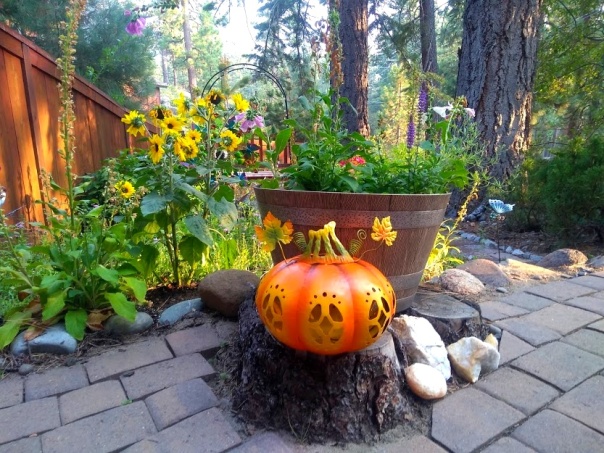 On Monday, the last day of August, the Moon was huge and orange like this new solar garden pumpkin addition my parents gave me. As you can see, I’ve been playing around with its placement, but I feel it’s come to rest amidst the owl guardians. 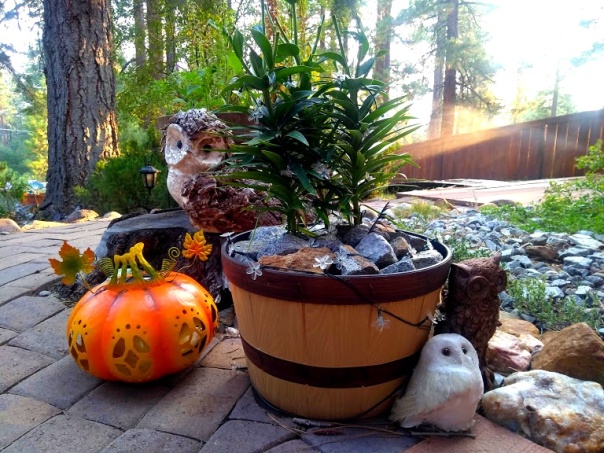 The Moon was nearly full since the Pisces Full Moon was last night/very early this morning – the 1st/2nd of September (depending on where you live). I took these photos as the night sky blanketed the mountain here last evening. 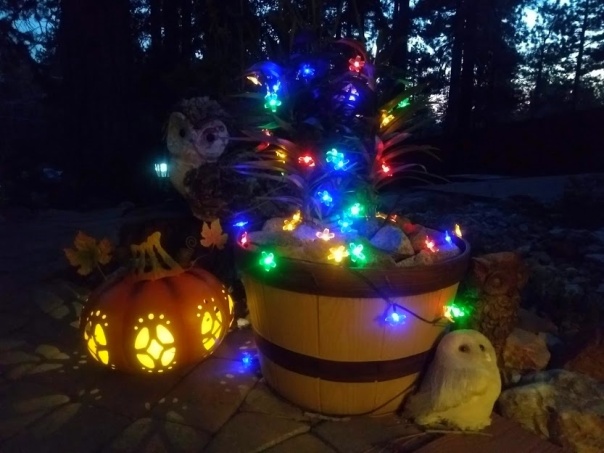 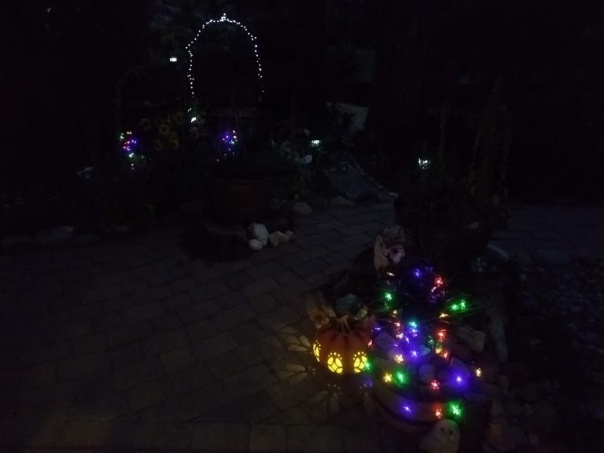 Curiously, tiny bats were circling above me, over and over, on the night of the huge orange Moon (Monday). All of it was feeling very much like the celebration of the upcoming season and Halloween/Samhain.

We don’t see bats very often, although they live here, so that was an interesting sighting that of course made me think of the messaging, which accentuates the theme of rebirth that the other animal sightings around me have also spoken of.

They also message to me about seeing through illusion, heightened intuition, paying attention to dreams, deepening within, ability to see in and through the darkness, the Underworld, exploring the mystery, and loving the shadow aspects. Circling above felt like they were creating a vortex opening through the crown chakra perhaps to bring through new insights and wisdom. Bats live in womb-like caves, considered the belly of Mother Earth, being reborn every evening when they emerge. This morning I woke feeling some crown chakra energy on the left side of my head, but it subsided after getting moving.

To add to the evening the Moon and bats were so prominent, earlier that day I received quite a few special things in the mail. One package was from a cosmic sister soul who sent me a box full of enchantment. It included two sets of five feathers – each set from a different owl.

To say I was in awe is an understatement. Just touching the silkiness of the feathers gave me chills and when I took them out to find them a place at my desk, my crown chakra was throbbing until they were done being placed.

So lots of crown chakra initiations/activations! 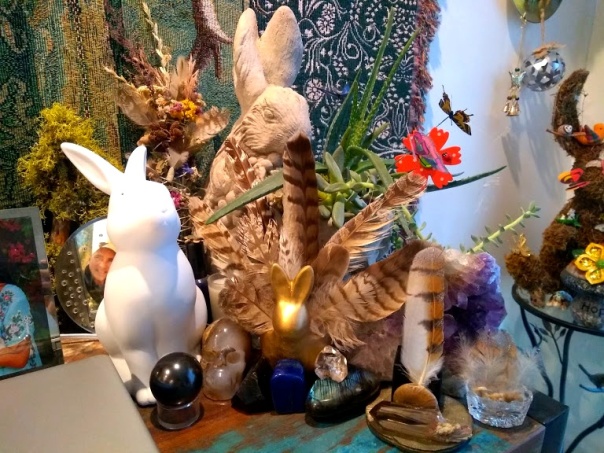 As you can see, they have come to rest next to some of my collection of Hawk, Osprey, and Great Horned Owl feathers (the others are part of a giant staff I created and others are being saved in a huge box of feathers for another future project). 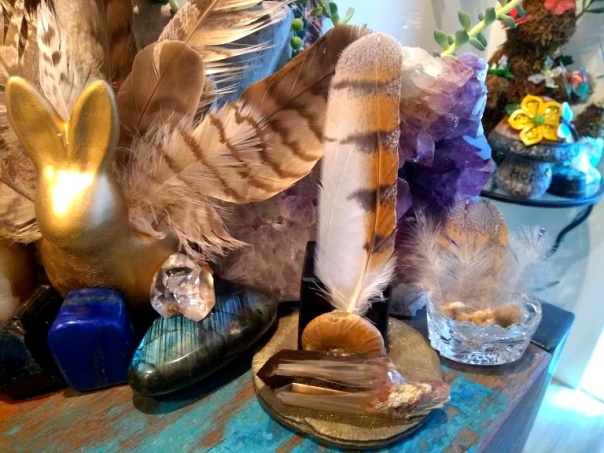 The Barn Owl ones to the right and Long Eared ones to the left, interspersed in my giant, dried forest wild flower smudge wand. 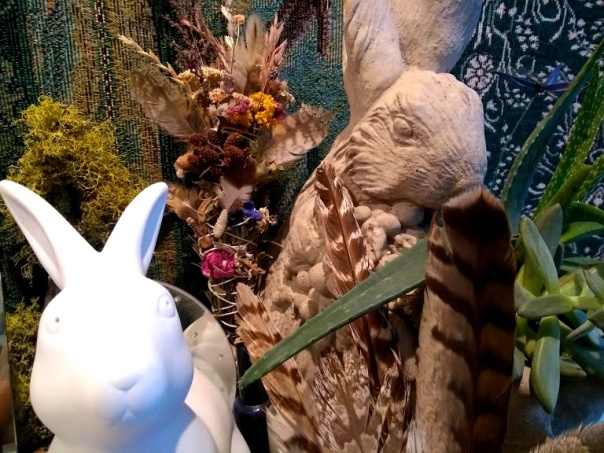 Everything has purpose and placement that is carefully chosen.

Along with tons of other fun, the gift box also included some goodies from her own garden and land (organic garlic and wild harvest Reishi), which felt like pure faery enchantment and ingredients for witchy potions of goodness. 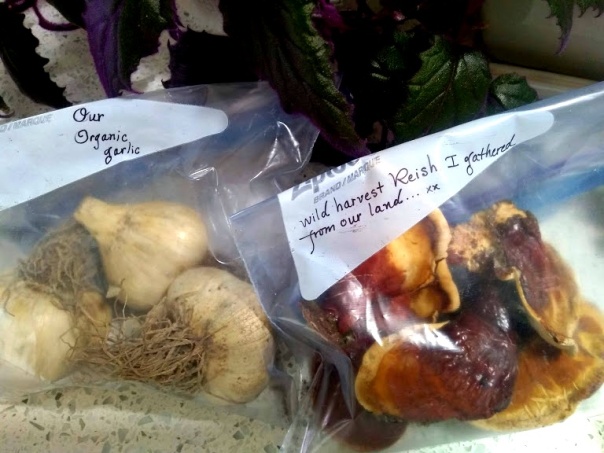 The alignment of everything with this Full Moon and all the details that feel like they interweave together, even down to the pumpkin/Moon mirroring, garden and owl placement, and then receiving garden goodies and owl feathers, just added to the magickal punch.

There were way more synchronicities than I can share in what the box held and all things that happened at her end on the very same day, including receiving her Reiki 1 certificate from me. And other people received their certificates this same day as well.

So it appears that September has kicked off some creative fun, seasonal prep, project completions, and activations – thanks bat and owl friends, and Pisces Moon. All of it feeling very rich in symbolism to help support the upcoming steps of the journey.

That’s a peak at the start of the month openings here.

Do you have any projects in motion currently?

Hope September opens some new paths to everyone for greater harmonizing within and without. 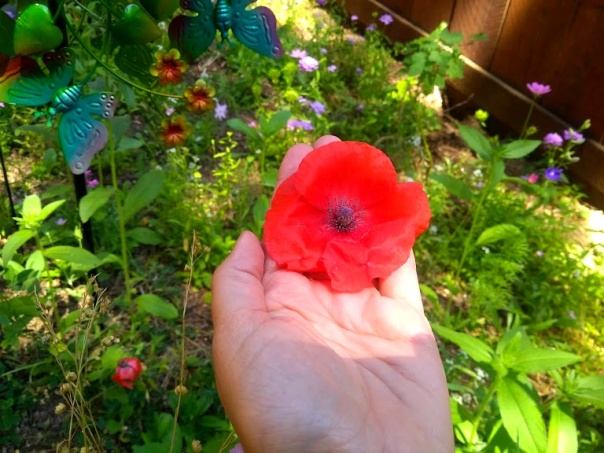 If you want an insight on September’s energy, you can check out Monday’s blog with Lee’s forecast or get a quick astrological overview from Laura’s September 2020 North Node Horoscopes.

Side note: If you don’t know about these, North Nodes are another powerful tool for soul evolution and alignment. They’re something I stumbled upon back in my earlier personal growth and astrological research (age 20-22), along with their counterpart South Nodes, and have remained a mainstay guiding post for my life that shined a light on how to channel my full chart of energies more efficiently. It wasn’t something on most people’s radars to focus on then, so I explored it myself. Later, I brought it to the attention of my more astrological counterparts – my brother and Laura, as my intuition told me there was gold in this. I’m not led personally to go full-on astrology or delve into that in any complexity via my work with others. I just lock in to what intuitionally stands out as key to me, but I’m so glad to see that the North Node information is becoming more prominent and that Laura now offers these mini monthly horoscope overviews. It’s so helpful to have a variety of tools for personal empowerment that resonate with each of our gifts, personalities, and frequencies.

Creating life as a work of art with a magick rabbit by my side. I remember my song. Do you? Artist, Author and Reiki Master Teacher with over 25 years' experience in creative healing arts and metaphysical studies. Tania inspires people globally to return to natural harmony, draw forth imagination to manifest dreams, embody creative empowerment, and live more magickally and abundantly from their most natural frequency – in essence, Tania helps you to remember your song.
View all posts by Tania Marie's Blog »

Posted on September 2, 2020, in Uncategorized. Bookmark the permalink. 12 Comments.