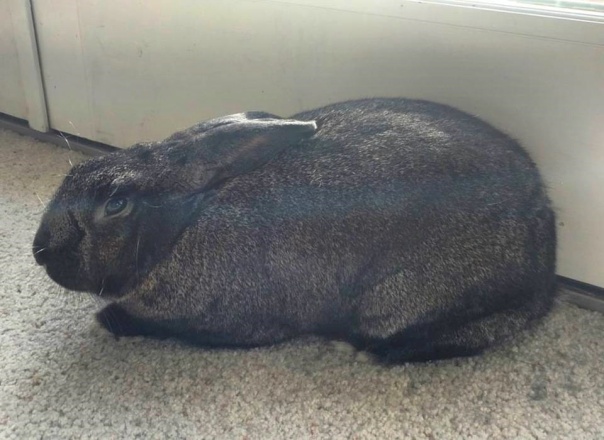 This was Astrid a few days ago in meditative mode tuning in to all around her and sending out energy to those in need. As you can see, a blueish green ray of light is beaming across her core and through her all-seeing eye. She is connected to the Source of All That Is through the light within her, as she especially tunes in to the bunnies at Save A Bunny where she lived before coming to me and where a lot of displaced rabbits whose families had to evacuate from the fires and a big group of abandoned rabbits left in boxes in a park, have all come to be cared for there as well. She’s been extra snuggly last week, really absorbing all the love I give her. She knows the importance of giving AND receiving. This makes me happy, as my bunnies have always been huge givers and this can result in blow outs because of the enormous energy they exude from their fragile bodies, which then takes rebalancing. Astrid is a strong one, but it makes me happy to know she is open to the flow of energy to help keep her healthy and able to continue giving and working the magick as she does.

I feel that so many healers and empaths can benefit from this reminder, but everyone in general will feel that boost when opening the stream of energy to flow naturally.

That leads me to share some bitter and sweet news connected with Astrid’s focuses and the rabbit rescue from which I adopted her from, as both sides of the coin are always present in the bigger picture of things.

The following shares come to you from Save A Bunny and their Facebook updates, as well as a personal message from Marcy – the head of this incredible organization. The first involving good news for rabbits, cats, and dogs in California.

Here are some moving images and updates copied from their page. I feel called to share these, prompted by Astrid, as a way to bring her voice and the voice of these voiceless ones into form.

Celebrations for the three most euthanized animals in the U.S., reverence to all and Mother Nature, and so much love sent to everyone and all of the beings affected by these wildfires and events in the world.

Thank you hugely Marcy and Save A Bunny for all that you do. You move me beyond words with your love and dedication. Sending so much love to you all there, as just like Astrid, receiving will help aid your continued efforts.

The following comes from Save A Bunny: 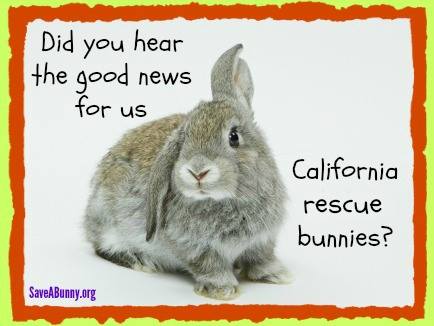 “California to require pet stores carry only shelter and rescue animals for adoption.

Yesterday Governor Jerry Brown signed legislation (AB-485) mandating only animals from animal rescues and shelters may be offered at pet stores. The legislation, aimed at reducing the number of animals in shelters, will take effect in 2019. Stores can be fined $500 for each animal not from a legitimate rescue organization. California is the first state to pass this type of legislation.

Thank you, Gov Brown, and let’s keep working to find every bun a loving forever home!” 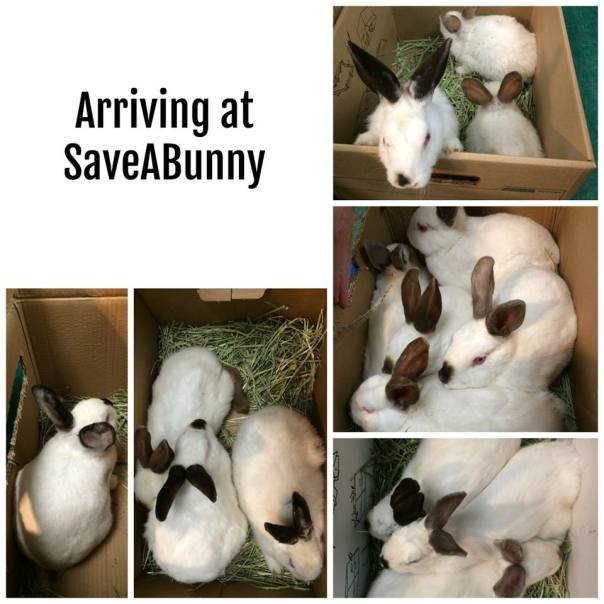 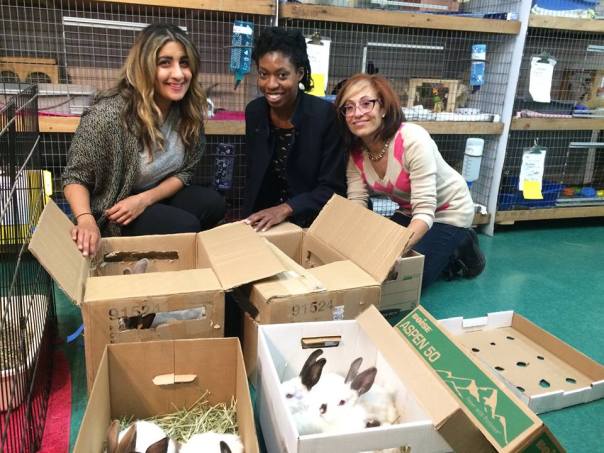 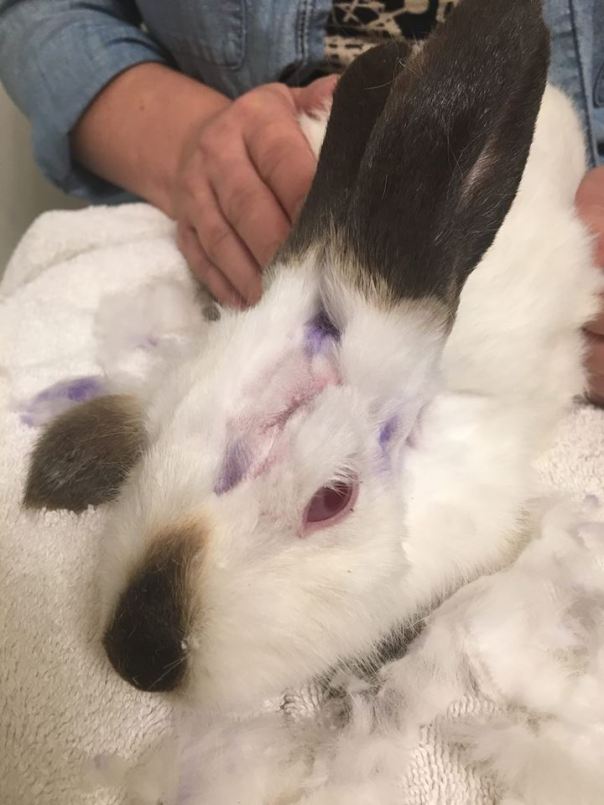 A baby girl who was dyed/painted purple. She has a head trauma that is very swollen. 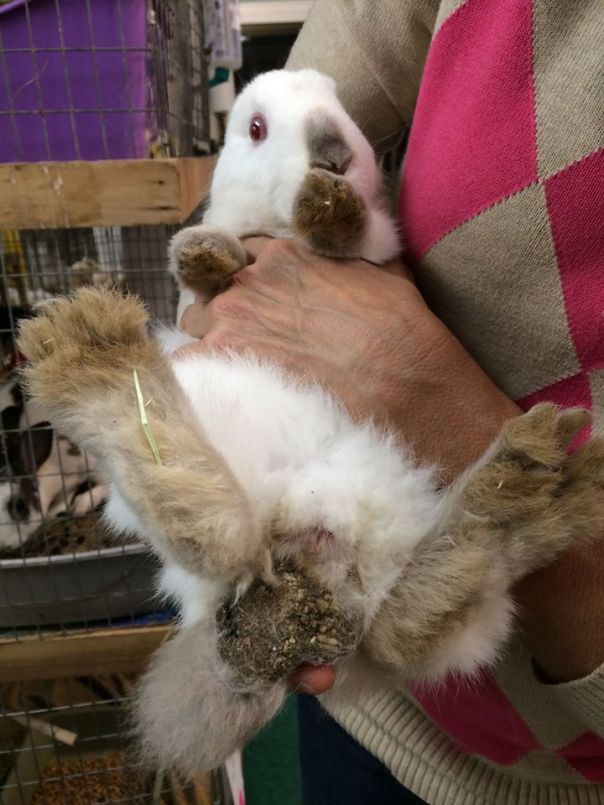 Baby boy with filthy and encrusted hindquarters. We spent hours this afternoon shaving and trimming all the bunnies of their dirty and matted fur. 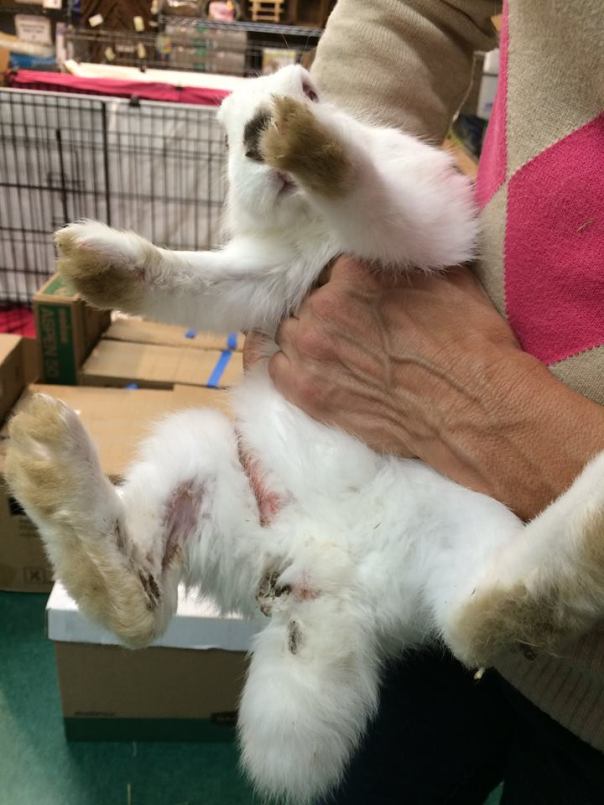 Baby boy with bad urine scald (thus the fur loss) and injuries to his genitals. 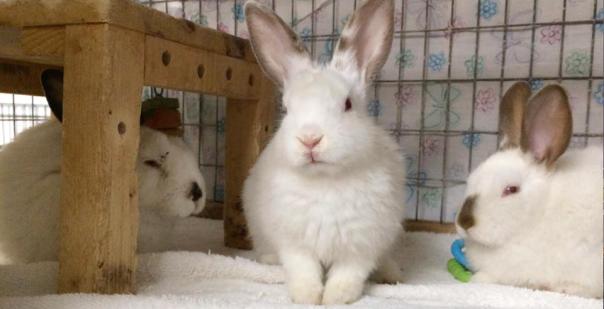 3 baby boys resting and getting plenty to eat and drink. Poor things seemed so tired and traumatized on arrival, and not behaving like babies at all. But today some started coming out of the shell shock and we’ve glimpsed a tiny binky or two.

“Wildfire Bunnies and their rescue

Late last night we took in 15 rabbits on an emergency basis. We’re calling them the Wildfire Bunnies and they came from Salt Point State Park about 2.5 hours north of SaveABunny in a somewhat remote area of California.

A couple days ago rangers found the bunnies abandoned in the park. They’d been left in cardboard boxes with some rice and peanuts (both bad for bunnies) and no water. Doing the best they could with limited resources the rangers took them to a shed then started calling around to animal shelters, and SaveABunny was the only rescue who agreed to take them sight unseen and not knowing anything about their condition.

In the meantime wildfires began raging out of control overnight and Salt Point was declared a safe place for fire evacuees, so the bunnies had to leave the park within hours but due to the driving distance and remoteness of location it was really hard to find anyone. Thankfully 2 wonderful angels, Heather and Shereen, agreed to make the long trip after work and bring the bunnies back late at night.

There are a couple of adults and the rest are babies, all in various states of malnutrition and neglect, and it took most of the day to do a detailed assessment. Some will need to see a vet ASAP such as one baby with obvious head trauma, one with an injured (maybe broken) leg and one who’ll likely need surgery because of injury to his private parts.

At the same time we’re also housing bunnies whose families had to evacuate as well as fielding many calls for help from county animal shelters and rescues.

We’re committed to assisting as many people and bunnies as possible, with devoted volunteers working all day and late into the night.

Here are ways to help:

— Transport: if you’re willing to pick up bunnies from the shelter in Mill Valley, CA and drive them foster homes in other parts of the area, please send a PRIVATE message to SaveABunny FB with your phone number and specifying what geographic region(s) you’re willing to cover.

— Foster: If you’re willing to host a bunny for a couple weeks and you live in the Bay Area region, please fill out the application http://www.saveabunny.org/foster. We’re really trying to keep lines of communication clear so filling out the application will help us tremendously so we have all your basic information in a way that can be shared amongst volunteers.

— Donate: If you’d like provide the Wildfire Bunnies with a little toy or some supplies our Wish List is http://tinyurl.com/SaveABunnyWishList.

Thank you so much for the encouragement and support, the bunny community is a very wonderful group to be a part of!”

And a note from Marcy:

“Dear Friends, Simply put ….thank you for your trust and support during these tragic wildfires in Northern California.

SaveABunny is “guerrilla rescue.” We’re scrappy, entrenched behind the scenes and our mission is always to take the unwanted, traumatized or abandoned rabbits left behind. Sight and condition of the rabbits is frequently unknown. That is how we are helping during the tragic wildfires in California.

Our doors are open to bunnies who have fallen between the cracks. Left behind, found as strays or now homeless. We’re also here for the displaced weary and frightened people who need peace of mind that their bunnies are safely being cared for–FREE OF CHARGE.

This is not glamorous work, nor is it a fundraiser. It is an act of love for humans and their animals. That’s what we stand for and who we are as a group.” ~Marcy

Creating life as a work of art with a magick rabbit by my side. I remember my song. Do you? Artist, Author and Reiki Master Teacher with over 30 years' experience in creative healing arts and metaphysical studies. Tania inspires people globally to return to natural harmony, draw forth imagination to manifest dreams, embody creative empowerment, and live more magickally and abundantly from their most natural frequency – in essence, Tania helps you to remember your song.
View all posts by Tania Marie's Blog »

Posted on October 16, 2017, in Uncategorized and tagged astrid, healers, rabbit rescue, rabbits, save a bunny. Bookmark the permalink. 12 Comments.